Yesterday, with Kristen and Season One of Buffy (finally someone to share it with) the spinathon began.  It was so great to have my groove on, the best company and buffering Buffy on the computer.  Kristen’s needles were blazing (they aren’t called Addi Turbos for nothing) and I was in spintastic form if I say so myself. 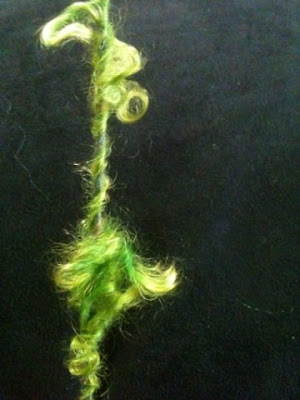 I know this will make me sound like a bad cat mommy, but it was nice to have a break from Hadiya for a few  hours.  The pain meds that she is on are making her do ridiculous things and as well as having the cone on her neck, flipped upside down (John thinks she looks like a French Nun) we have had to tape a sock to her foot to keep her from scratching the wound.  So now every three steps she does this crazy cha cha with her back leg.

This is better still than the exhausting adventure of Thursday which was the entire night of chasing her around the house with a baby onsies on one leg, and the 2nd arm hole around her neck as she ran through the house with half of it trailing behind her.  Anyone have any friends that would like a set of onsies 0-3 month size, 6 of them embroidered with days of the week.  —-Only Wednesday is missing.

Getting ready for Ladner tomorrow.  John’s on kitty duty for this one.